Controversial Covid passes will be scrapped in England this month as the country's Omicron wave continues to collapse, it was claimed today.

Health Secretary Sajid Javid is said to have told MPs that he shared their 'instinctive discomfort' at the certificates, which 100 Tories voted against.

Ministers are also keen to ditch widespread working from home guidance when the current Plan B measures are reviewed on January 26. It could mean that compulsory masks on public transport and in shops will be the only remaining curb.

Britain's Covid cases have fallen week-on-week for the past eight days in a row, with 109,000 new positive tests on Thursday. Hospital admissions have also flatlined.

At a meeting with Tory MPs yesterday, Mr Javid hailed the 'encouraging signs' – but  warned that hospitals remained under 'significant pressure', The Times reports.

Currently, people in England need to show proof of vaccination or a negative lateral flow to enter large events and nightclubs.

A Whitehall source told the newspaper: 'There was always a very high threshold for the policy and it looks increasingly likely in a couple of weeks that threshold won't be met. The way cases are going it will be hard to justify renewing.'

Boris Johnson faced his biggest Tory revolt since the start of the pandemic over the introduction of Plan B measures last month, with nearly 100 Conservatives defying the party whip to vote against them.

The PM's chief Brexit negotiator Lord Frost dramatically resigned in protest over the rollout of the curbs. Yesterday he slammed the 'Covid theatre' of masks and passes, and called lockdown a 'serious mistake'.

Meanwhile, Wales' First Minister has announced Covid curbs will finally be loosened at the end of the month.

After weeks of dismissing England as an 'international outlier' over No10's gamble to not introduce tougher restrictions, Mr Drakeford conceded there was little need for the current measures in Wales now that Omicron is 'coming down very rapidly'.

Wales went harder than England over Christmas, shutting nightclubs, reintroducing the 'rule of six' and banning more than 50 people from attending an outdoor event. 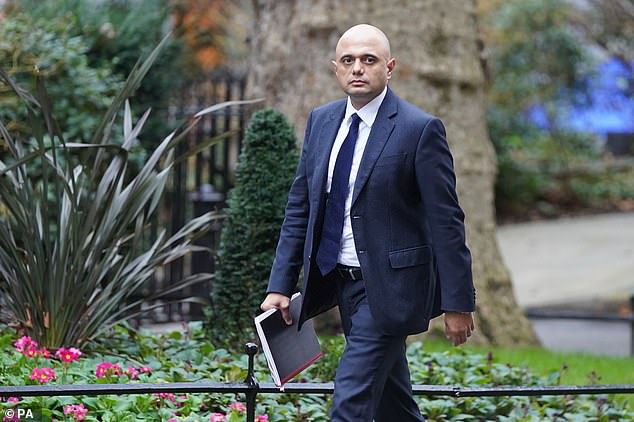 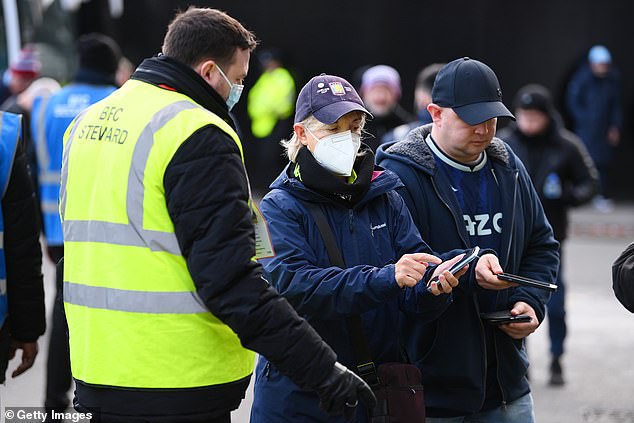 A fan has their Covid pass checked outside of the stadium ahead of the Premier League match between Brentford and Aston Villa at Brentford Community Stadium on January 2, 2022 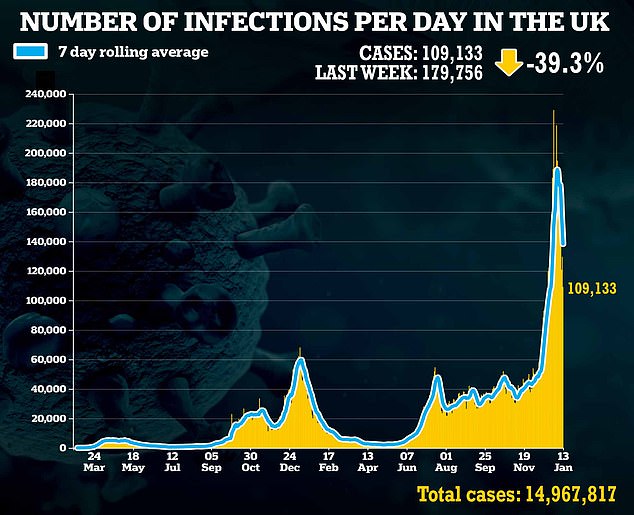 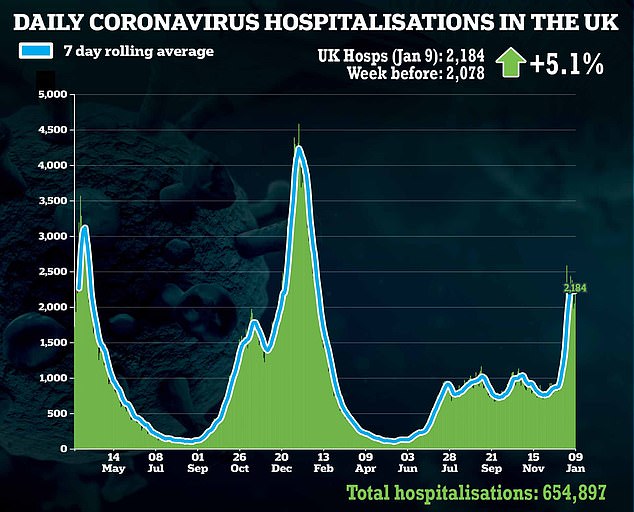 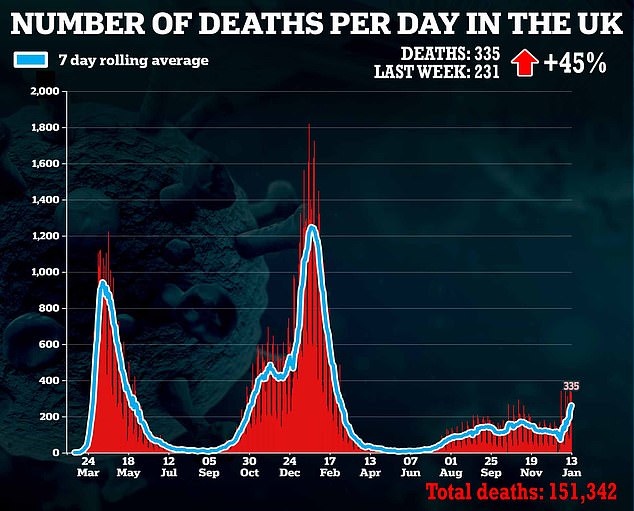 On Thursday, daily Covid cases fell by nearly 40 per cent in a week to 109,133 — the eighth day in a row that positive tests have declined week-on-week

Covid curbs in Wales will be loosened at the end of the month, the country's First Minister has announced.

After weeks of dismissing England as an 'international outlier', Mark Drakeford conceded there was little need for restrictions now that Omicron was 'coming down very rapidly'.

Restrictions on large events and businesses brought in around Christmas will be scrapped 'gradually' over the next two weeks.

Mr Drakeford told BBC Radio 4's Today: 'We appear to have passed the peak of Omicron, and are coming down very rapidly on the other side, that gives us confidence that over the next two weeks we can gradually and carefully lift the level of protections we needed over the Christmas period, because from a public health perspective it will then be safe to do so.'

He denied the measures had come at a huge cost to Welsh commerce and hospitality, blaming the impact of the Omicron wave instead.

Wales has been in Tier 2 since December 26, meaning nightclubs are closed, a maximum of six people can meet in a pub and only 50 people attend an outdoor event.

Curbs on outdoor activities will be the first to be lifted, Mr Drakeford said.

Mr Drakeford criticised England's looser restrictions, saying they had led to 'thousands upon thousands' of people unable to do their jobs because of sickness.

He said: 'The government in England has been paralysed throughout this process and simply hasn't been able to take decisions.

'In Wales we have a government that is prepared to do difficult things when they are necessary to protect public health.'

The Times reports that it is unlikely that Covid passes will be renewed if the Department of Health argues that it is no longer needed.

Alicia Kearns, the MP for Rutland and Melton, yesterday pressed the Health Secretary to commit 'to dropping domestic certification at the earliest possible opportunity'.

He replied: 'I assure her and the House that as far as I am concerned we will not be keeping domestic certification in place a moment longer than absolutely necessary.'

Former cabinet minister Greg Clark called on Mr Javid to lift the curbs later this month, saying they 'have an impact beyond Covid as we know'.

Earlier on Thursday, Mr Javid cut the number of days people have to self-isolate if they test positive for Covid in England to five.

The Health Secretary told MPs that UK Health Security Agency (UKHSA) data showed 'that around two-thirds of positive cases are no longer infectious by the end of day five'.

He added: 'After reviewing all of the evidence, we've made the decision to reduce the minimum self-isolation period to five full days in England. From Monday, people can test twice before they go — leaving isolation at the start of day six.

'These two tests are critical to these balanced and proportionate plans, and I'd urge everyone to take advantage of the capacity we have built up in tests so we can restore the freedoms to this country while we're keeping everyone safe.'

Under the move, people will be able to take tests on day five and six but, if positive, must stay in isolation until they have had negative tests on two consecutive days.

Mr Javid told MPs Covid is 'still with us and there are still likely to be difficult weeks ahead', but pointed to encouraging signs that infections are falling in London and the East of England, although they are rising in other parts of the country.

The Government has been under pressure to bring the situation in England into line with the US, where the isolation period has been cut to five days.

The previous UK Health Security Agency guidance was for cases to isolate for at least six full days from the point at which they had symptoms or got a positive test, whichever is first, with release from self-isolation after two negative lateral flow test results on days six and seven. People could then leave self-isolation on day seven.

The move to cut the isolation period was welcomed by Tories who called for the change and could help ease pressure on the embattled Prime Minister.

It will also help address staff shortages across the economy and public services by allowing people to return to work earlier.

Matthew Taylor, chief executive of the NHS Confederation, said: 'This is a pragmatic move which leaders will welcome if it can mean more health and care workers who are well enough can return to the frontline, providing it does not significantly add to the risk of the virus spreading. 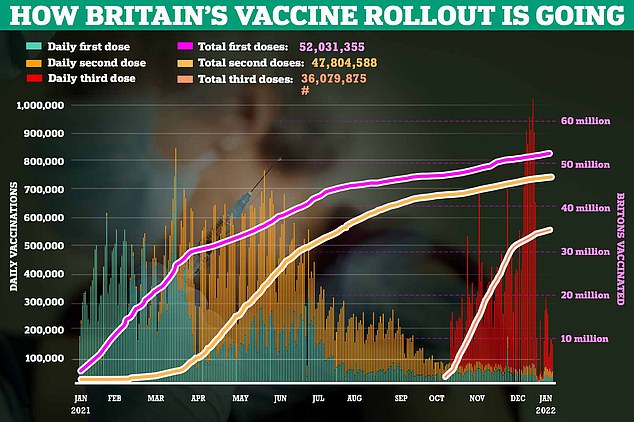 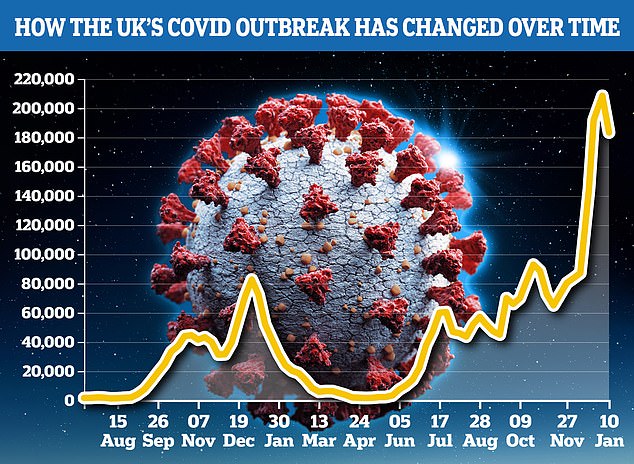 King's College London scientists estimated 183,364 people were now catching the virus every day, down from the record high of 208,471 in the previous seven-day spell. The data is also from health data science company ZOE 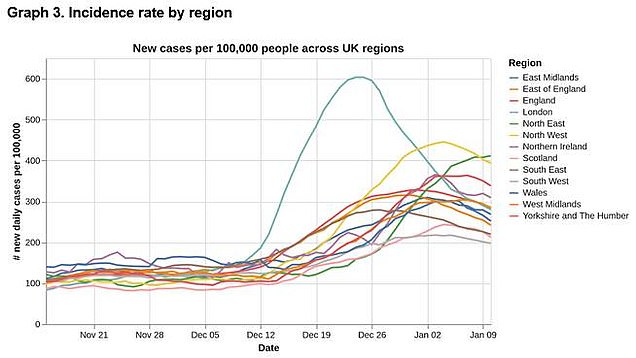 Covid cases are now ticking down in all England's regions except the North East (green line), they said, but even here there are now signs that infections are plateauing 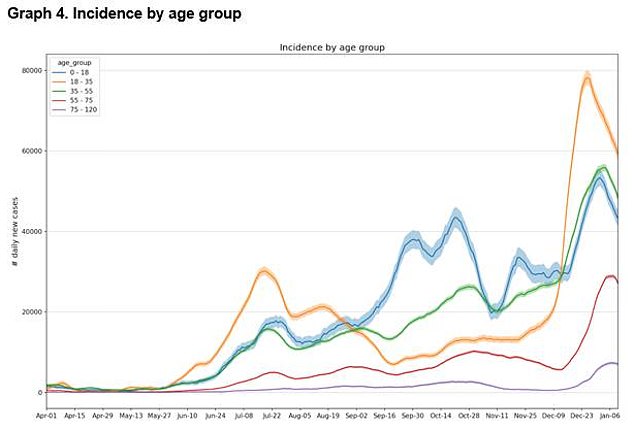 Every age group is also seeing their Covid cases tick downwards. But the scientists said a rise in children (orange line) amid the return of schools could not be ruled out, which would trigger an uptick in other groups 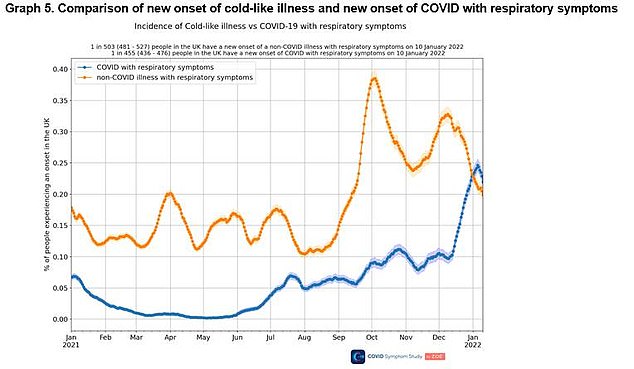 They also found people who were suffering from cold-like symptoms were more likely to have Covid (blue line) than other respiratory diseases (orange line). They said symptoms triggered by the virus were 'indistinguishable' from a cold 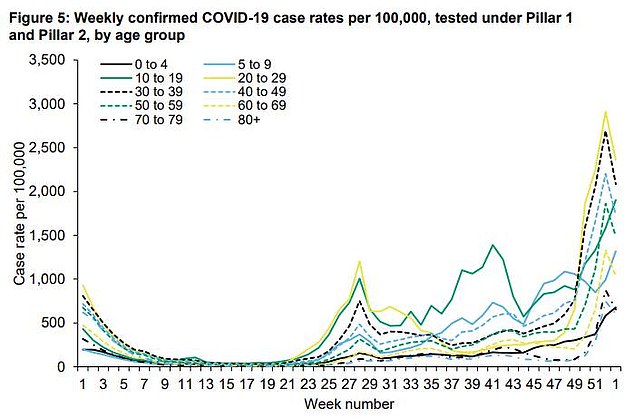 UK Health Security Agency figures published today showed cases were now dropping in all age groups except the under-19s. Experts had warned cases could rise in this age group as children returned to school from the festive break 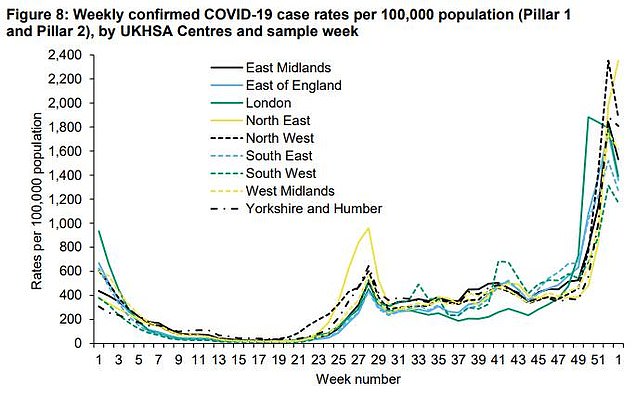 Covid cases dropped across all England's regions except the North East, official data showed, where they continued to rise 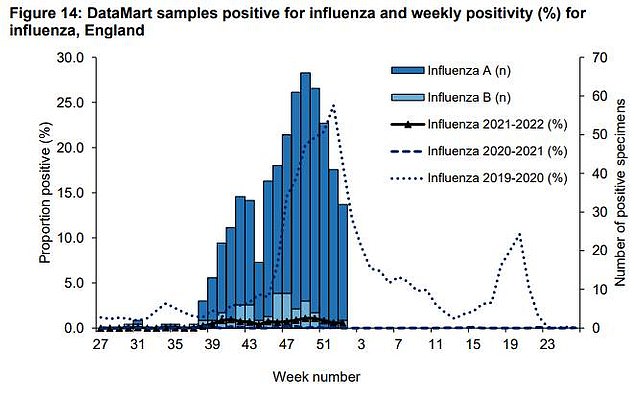 And latest figures showed that flu cases remained well below the levels reported pre-Covid, as the seasonal menace failed to materialise as a major threat for the second year in a row

'The number of people in hospital is still high, with admissions still rising in the North of England and, alongside that, the NHS faces a huge care backlog and significant vacancies.

'Leaders are grateful for the military support that has been made available to help deliver hospital services, as well as the three-month agreement with the independent sector, but we are certainly not out of the woods yet.'

The health service has been under intense pressure because of high Covid rates, leading to both hospital admissions and staff absences increasing.

Some 40,031 NHS staff at hospital trusts in England were absent for Covid-19 reasons on January 9, up two percent on the previous week (39,142) — and more than three times the number at the start of December.

But the NHS England data shows hospital staff absences due to Covid have dropped every day since reaching a peak of 49,941 on January 5. The total includes staff who were ill with coronavirus or who were having to self-isolate.

Lord Frost has urged Boris Johnson to categorically rule out another lockdown as he suggested the Government's current coronavirus rules are 'Covid theatre'.

The peer quit the Cabinet in December because he said he could not support the Prime Minister's Plan B measures of increased mask wearing and vaccine passports.

He has now told The Telegraph's Planet Normal podcast that he believes people will look back on lockdowns in the future and view them as a 'pretty serious public policy mistake'.

The former Brexit minister said Mr Johnson should therefore promise the nation that there will not be another national shutdown.

Lord Frost also took aim at the current Covid rules as he claimed vaccine passports and compulsory face masks do not work and Mr Johnson should 'focus on what does work' so the UK is ready for the next twist in the pandemic.

'So on Covid, that was the reason I resigned, that's what took me out of the Government in December, I didn't agree with the Plan B measures - masks, vaccine passports,' he said.

Sajid Javid to scrap Covid passes within a fortnight