By Betsy Ladyzhets For Dailymail.Com

The new report is a significant drop from case reports last week. The state reported close to 90,000 cases in a day on December 31.

However, Governor Kathy Hochul warned at a recent press release that cases could increase later this week, as testing sites were closed over the holiday weekend, causing delays in case reports.

Hospitalizations in New York have increased past 10,000 Covid patients, the highest level since the spring 2020 surge 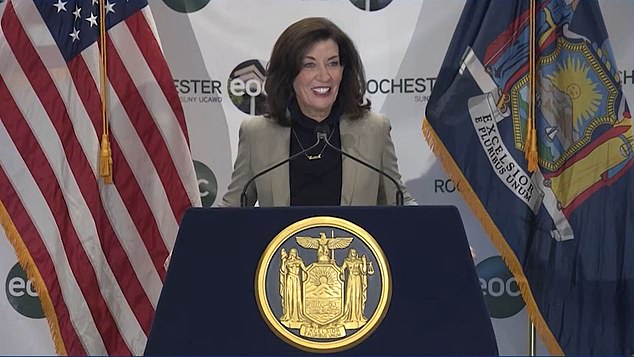 New York state reported 53,276 new Covid cases on Tuesday - a decrease from last week, but Governor Hochul warned that case reports in the coming days may be higher

During the spring 2020 surge, New York peaked at about 10,000 new cases a day. This was prior to widespread testing availability, however, so true numbers were likely higher

In December, New York became a hotspot for the Omicron variant.

According to data from the Centers for Disease Control and Prevention (CDC), Omicron was spreading rapidly in New York and New Jersey before it arrived in other regions of the country.

An anime convention held in New York City in late November may have been a superspreading event for the variant, as a number of Omicron cases were tied to the event.

As of January 1, Omicron was causing an estimated 98 percent of new Covid cases in the New York and New Jersey region, per the CDC.

The state of New York has reported record Covid cases in recent weeks - higher than at any other time during the pandemic.

During the spring 2020 surge, the state's peak record was closer to 10,000 cases a day - though many cases were going unreported at that time due to limited testing.

So far, case reports for New York in the new year have been lower than late December records.

However, Governor Kathy Hochul warned in a Monday press conference that the 'numbers are misleading' and 'a result of the holiday weekend.'

Covid case numbers typically drop during and after holidays, as testing sites are closed and the public health workers who compile case reports take days off.

Many New Yorkers with mild Covid symptoms may also be deterred from testing by the huge lines that have formed outside clinics in recent weeks, as temperatures plunge.

Interpreting Covid case data in late December and early January can be particularly tricky, as Christmas and New Years both cause reporting delays.

'Those numbers are probably going to be much higher tomorrow. They didn't go from nearly 90,000 to 51,000,' Governor Hochul said on Monday.

'That is simply a function of people not getting tested over the weekend. So, my concern is that trend that you see there is going to continue going up.' 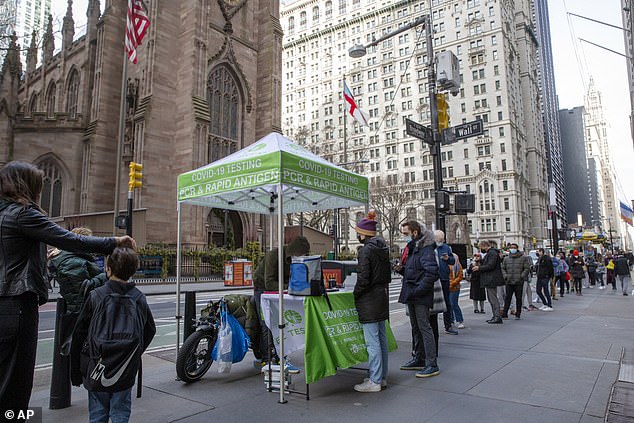 Case numbers may increase in the coming days, as more people are able to get tested at sites that closed over New Years, Governor Hochul said. Pictured: People line up for testing in the Financial District, Manhattan, December 2021

In other words, roughly one in every 35 NYC residents tested positive for Covid in the space of a week.

The city's test positivity rate is about 35 percent as of January 4, indicating that a number of positive cases are not counted in the official data.

Statewide, the test positivity rate is about 22 percent - still much higher than the five percent threshold considered concerning by the CDC.

In NYC, roughly one in every 35 residents has tested positive for Covid in the week ending January 1, according to city data 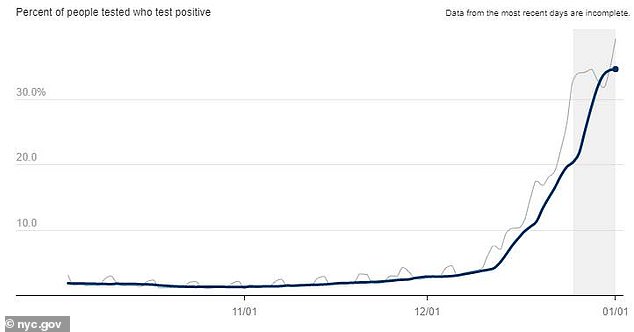 The case numbers in NYC are likely significant undercounts as they don't include rapid at-home tests. The city's test positivity rate is over 30%

The state reported 10,411 current Covid patients on Tuesday - the highest number since the spring 2020 surge.

During that surge, statewide hospitalizations peaked at 10,993 patients on April 30, 2020, according to NBC New York.

Some major hospitals in NYC are rescheduling elective surgeries and taking other measures to address their high capacities.

Mount Sinai in South Nassau, one such hospital, told NBC New York that its number of Covid-positive patients reached 100 on Tuesday - filling about one-third of all available beds.

At the same time, almost 200 of the hospital's employees were out sick due to Covid cases or exposures.

'The best way to protect ourselves and our children from getting hospitalized with COVID is with the vaccine and booster,' Governor Hochul said in a statement on Tuesday.

'As we continue to fight the winter surge, let's continue to use these tools: Get your second dose and booster when eligible, get your children vaccinated, remember to wear a mask and stay home if you're not feeling well.'

'If we don't, many more New Yorkers will continue to get sick.' 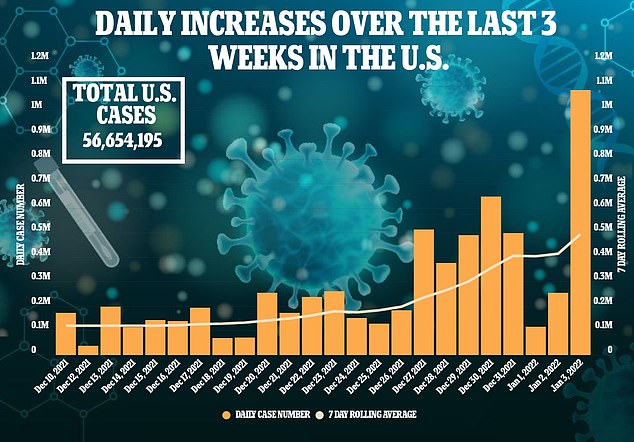 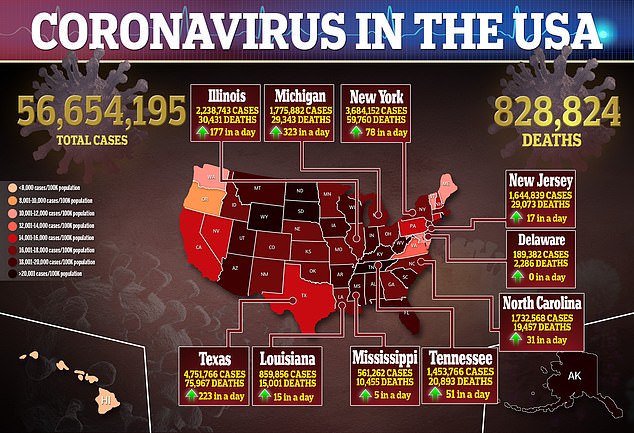